As analysts we engineer reports, and it is through these reports that stakeholders gain insights to make better data driven business decisions. However, data is always changing and so are the goals and objectives of the business. These changes need to be reflected in the reports and must be adjusted periodically.

Prior to this year adjusting reports that stakeholders were actively utilizing could have caused many headaches. It was ill advised to update reports that stakeholders used regularly, as elements of the report may have appeared broken to stakeholders. The best alternative to this situation was creating a copy of the report to do the adjustments while the stakeholders used the previous model. However, this too may have resulted in dissatisfaction as it increased the likelihood that the previous version was still in rotation and the latest version was not utilized.

Google Data Studio noticed these troubles and introduced a valuable solution. Early this year they released a report publishing control. No more creating various copies, but instead, you can now work on a draft while your viewers see a previous published report version.

This publishing option is automatically disabled in Data Studio, so you must enable the option first to use it.

Step 1: Go to Edit your report. 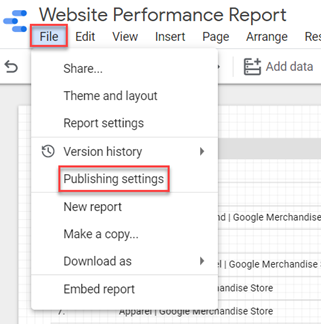 Remember you can turn it off afterwards, if required.

Now that you have enabled the ability to create a work in progress version while your viewers see a published version – let’s go through a scenario when this feature can be used to an analyst’s advantage.

Let’s say ABC’s Incorporated has a report that allows the stakeholder to see how much traffic each site brings. However, the stakeholders mentioned that they wanted to be able to drill down further to see which source medium the users are coming from and to ensure that they can filter the table based on that source.

Before, completing the updates mentioned above might have taken a long time due to the delays of copying and configuring another report. This is no longer the case, as you can now use the report publishing control!

Step 1: Make sure you are in the draft version by selecting this mode in the dropdown menu beside the title.

Step 3: Once the changes are finalized you can publish the draft by selecting the Publish buttons outlined in the red boxes below. 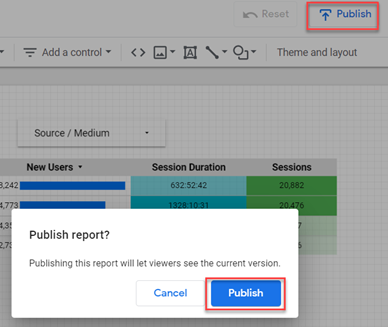 Another benefit to using this publishing option is accessing the version history. You can use this to publish or restore a previous version of the report you had already configured.

Learn more about the impressive effects that Report Publishing has to offer at Data Studio Help!

We hope this quick tour of a new update in Data Studio was helpful to your report building. Feel free to let us know what you think of this new feature in the comments below or contact us if you have any questions! And don’t forget to check out the rest of the 12 Days of Data Studio blogs below to level up your skills and understanding of Data Studio.

Other Posts in Our 2021 Data Studio Series: