Every data analyst is faced with the task of having to communicate the results of their analysis. Often, the best way to tell the story of the data is by using visual aids—bar charts, line graphs, maps, funnels, etc. When used appropriately, data visualizations can be used to communicate insights much more effectively than a table of raw metrics.

Working with Google Analytics data is no different. You can spend hours digging through report after report, filtering and segmenting, “slicing and dicing” your data to extract some potentially valuable nuggets of information.

But how do you then communicate your new-found knowledge to the people in your organization who need to know?

Each of the above methods can be useful in the right situation.

But there’s one more tool you should have in your data visualization toolkit, and it’s built right into Google Analytics. I’m talking about GA’s best-kept secret—Motion Charts!

Even though the feature has been around forever, likely only a small fraction of GA users know that Motion Charts exist, and an even smaller fraction have actually used them successfully. It may look a bit intimidating at first, but don’t worry – we’ll go step-by-step through some examples of visualizations that are easy to put together, yet powerful for communicating key insights.

Let’s take a look at Motion Charts in action. 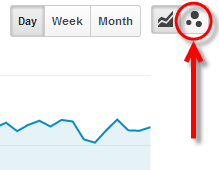 First of all, how do we access Motion Charts in GA?

This is probably the easiest part. Just click on the spotted button located above the timeline graph. Motion Charts are available on almost any GA report.

Tip – The Motion Chart interface is Flash-based, so make sure you have the latest Flash plugin installed. When you first load a Motion Chart, it will probably look something like the following:

At this point, most people don’t really know where to begin. To give you a place to start, I have flagged the most important parts of the interface:

Well, that’s all nice to know. But how do we use this for something useful?

Example 1: Suppose that after analyzing our data, you have discovered that certain geographies are generating a large volume of traffic but have low engagement, while other geographies that have lower volume are much more engaged. Motion Charts lets you elegantly plot this relationship without messing around in Excel:

In this chart, we have Sessions on the horizontal axis and Avg. Session Duration on the vertical axis. We can easily see that Toronto has a relatively high volume of sessions, but relatively low avg. duration. However, Montreal has the highest duration and still generates a relatively high number of sessions. Based on such information, you may see a need to change the targeting of your digital marketing campaigns, and a chart like this can help make your case. (If you would like labels to appear on your chart, just click on each bubble to toggle its label on or off. If you also want non-labelled bubbles to disappear, as in the chart above, click the wrench icon in the bottom right and move the opacity slider to 0%.)

Example 2: Perhaps you have observed that some of your acquisition channels have a much higher bounce rate than others. The bar chart mode in Motion Charts provides a quick way to show this visually:

To switch to the bar chart mode, click the middle tab above the graph. In this chart, we see the Bounce Rate for each channel plotted in descending order. Adding labels makes it clear that the Banner and PPC Display channels have relatively high bounce rates and PPC Search and Organic Search have relatively low bounce rates.

A chart like this can strengthen a recommendation to revise the targeting of banner and display ads or to invest further in search ads and SEO.

Example 3: You noticed something strange in your GA data last month (e.g. PPC traffic dropped significantly and referrals shot up). Motion Charts lets you quickly put together a chart that isolates this trend:

Line graphs are standard fare in GA, including the ability to plot selected dimension values via the “Plot Rows” feature. However, the rows are always plotted along with the report total, which can often make the individual lines difficult to distinguish. Motion Charts gives you a built-in way to clear the clutter and view only what’s important.

If you’ve never used Motion Charts before, hopefully these examples are enough to spark your curiosity and get you started. We’ve really only scratched the surface of what Motion Charts can do… After all, where is the actual motion? We’ll save that and more for another blog post.

Let us know what you think about Motion Charts.